By default AQ-200 series protection IED Autorecloser function uses the standard method of generating only one final trip signal without differentiating between the 5 requests or protection stages. Final trip signal is also not generated at all when autoreclosing is disabled. Both of these functionalities are possible to do with the help of logic editor. 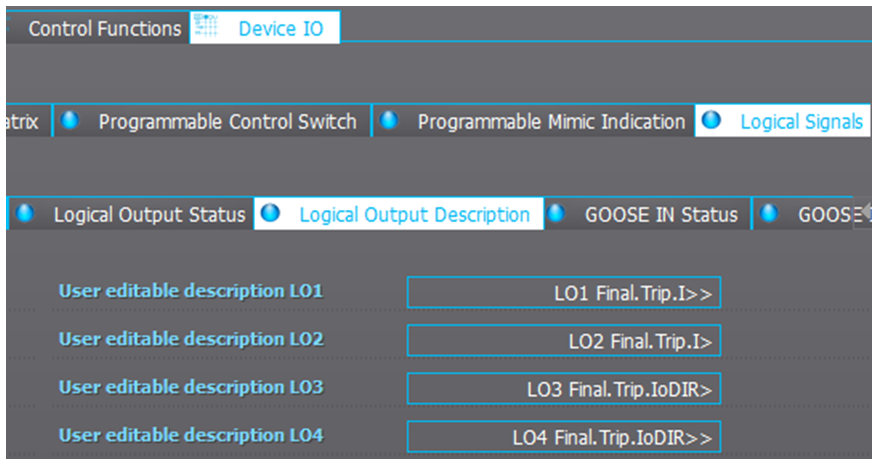 First set up the Logical Output signals for the final trip signals.

Then in logic editor build logic as seen in above image for each final trip signal. When this is done each of the logical outputs set up can be used for indicating protection stage final trips locally with LEDs or through RTU. Next up is the explanation of each part.

The logic has two branches for situations where autorecloser is either ON or OFF. Autorecloser will not make any final trip in case the function is switched OFF by a programmable control switch (or by digital input or other signal). For this reason the upper branch is made to get a final trip signal in case autorecloser is disabled. “AR On” is a signal generated by Autorecloser. This signal is added to equation with NOT gate to prevent final trip signal from being generated during the first trip shots when autorecloser is in use.
The lower branch in the lower branch I> Trip signal is connected through SR gates S (Set) input which activates the output. After the output of the SR-gate has been activated the logic chain will begin to wait for the “AR Final Trip” signal to be generated by autorecloser function. When autorecloser generates the signal “LO2 Final.Trip.I>” logical output will activate.  Delay gate should be used so that SR gate input R (Reset) has the time to reset the SR gate output after the sequence.